Thousands of children all around the world celebrated the 100th anniversary of April 23 National Sovereignty and Children’s Day with colorful messages. It has been 100 years since Great Leader Mustafa Kemal Atatürk dedicated the opening of the Grand National Assembly to the children of the world. Children from 29 cities of 22 countries shared their messages on April 23 through KidZania Istanbul. The video containing the messages was shared on KidZania Istanbul’s official social media accounts and on the website.

Nowadays, we miss children’s voices from streets, parks and school gardens. Thousands of children from all over the world have become one heart for the 100th anniversary of April 23 National Sovereignty and Children’s Day. Great Leader Mustafa Kemal Ataturk established the Turkish Grand National Assembly on April 23, 1920. It has been 100 years since he had dedicated this remarkable day to children.

Today, children fill everyone’s heart with full of joy. In the project, which was launched with the initiative of KidZania Istanbul, children from 29 cities from 22 countries celebrated April 23rd with enthusiasm. The children celebrated the holiday together with the messages they shared by overcoming the distances.

KidZania Istanbul CEO Ebru Timur said that KidZania citizens from Mexico to Qatar, Korea to Brazil, Thailand to Turkey celebrate 23rd April with enthusiasm although they are far from each other. “The most striking thing among the messages was that the children said they want full of peace and love. The most important finding of the Global KidZania Occupational Tendency Survey is that children are the same all over the world. Children can only aspire to what they know exists. In KidZania Istanbul, children learn financial literacy with their peers and internalize helpfulness and sharing. Children show us that another world is possible with this video” she said. The children took videos their dream professions and the difference they would make in this field. These videos were shared on KidZania Istanbul’s social media accounts. KidZania Istanbul stopped its activities on March 14 for the safety of its employees and the society. They continue learning while having fun experience with their social media accounts and website’s. 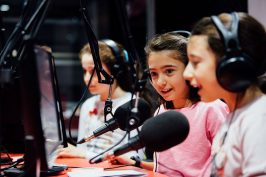